skip to main | skip to sidebar

Solidarity with the people of Gaza!
The University of Leeds has seen an occupation that has lasted exactly one week in support of the Palestinian people, who are suffering at the hands of the merciless Israeli Government.

In response to our demands, the University made the following concessions:

On Monday, the Vice Chancellor issued a public statement in which he "expressed his dismay at the conflict and the loss of life in Gaza and Israel." The University has declared that it is "agreeable in principle to facilitating schemes to provide surplus educational materials to Palestine...and that it will discuss with LUU (Leeds University Union) ways of extending opportunities for Palestinian students to study at Leeds." The University has also stated that it will review its socially responsible investment policy and that it will accept a list of roughly a dozen companies which concern us most and they will inform us whether they do or do not invest in the aforementioned companies. We will actively pursue all of these concessions to ensure that they are followed through.

Obviously these compromises are not enough in relation to the enormity of the humanitarian crisis taking place in Palestine at this moment in time, however the actions of the University itself made full negotiations entirely impossible. The University attempted to split, disorientate and intimidate the peaceful occupiers of Botany House in a vain effort to weaken our resolve. First the University cut the LAN internet access to the building in a fruitless attempt to hamper our ability to communicate with the wider world and trying to cause a rift between the occupiers and the PhD students and staff using the building at the same time. After a few days the University cut off the gas supply to the building, leaving us with no heating as a further attempt to dishearten us. During one set of negotiation talks between our delegates and the Vice Chancellor, vague threats were made about turning off the electricity, a truly shameful and underhand tactic. Throughout the occupation we maintained a strong relationship with the PhD students who continued working in the building (all support staff were relocated), many of them voicing strong interest and support for our cause and our actions.

There were further limits to the effectiveness of our campaign due to a lack of support from some of the pro-Palestinian activists and some parts of the left on campus. Members of the exec at LUU used scare tactics to mobilise people away from the occupation and attempted to dissuade pro-Palestine activists from joining the occupation by announcing that the police would storm the building at night, a completely unfounded and treachorous statement. This kind of action has illustrated the lack of radicalism and real support from pro-Palestine exec members, who hide behind their rhetoric to maintain credibility whilst attempting to destroy the most militant aspects of protest in order to further their appeal to mainstream students.

Within the occupation itself we have been vocal in our willingness to engage the wider public, as well as supporting PhD students by allowing them in to continue their work. We were helpful and amicable to people of all political viewpoints, engaging in debates with autonomous individuals and members of the Labour Students society and the zionists which misrepresent JSOC on campus.

There was a huge array of groups within the occupiers and everyone got along well, worked together cohesively and were united together in our cause, though political debates were continuous and dialogue and left-wing banter was a central topic of conversation between the occupiers. Similarly, unaffiliated occupiers and activists were treated with the upmost respect. This illustrates that left groups and autonomous activists CAN work together and that the idea that there is no unity or solidarity on the left is a myth, nothing more.

With respect to the wider movement, we would like to express our solidarity with universities which are still occupying as well as those universities which acheived some or all of their goals and those which were ejected without demands being met. Within our occupation students have expressed a complete discontent with NUS, particularly after the passing of the governance review, and feel that a new students union is required to truly represent students and the issues which affect them and which they are concerned about. Therefore, we are calling for a conference of all universities who wish to split from the NUS and disassociate themselves from the oppresive bureaucracy which it represents. We would like to stress the importance of networking and making links between pro-Palestinian groups across the country and the planet, particularly the groups who have been involved in occupations, because continuing our struggle and our fight on behalf of the Palestinian people is paramount to this occupation.

Thank you for all your support,

Comradely,
The occupiers of Botany House.
Posted by Leeds Uni Occupiers at 13:49 217 comments:

Sorry for the lack of updates, we have all been incredibly busy with lots of new support coming in after the start of term and negotiations with the uni.
Yesterday a group of three was elected to meet the Vice Chancellor's representatives and we talked at length - two and a half hours - about our demands and the Uni's response. The uni has released a statement to us today but we need to discuss a few more things with them. I will post up the results tomorrow.
In other news, Bradford have finished their occupation after just 24 hours, winning a number of demands:http://3.bp.blogspot.com/_3ZdHre37lTE/SYBXy0Opp7I/AAAAAAAAAeU/a9LQWOxyuVU/s1600-h/Uni_statment_gaza.jpg
Posted by Leeds Uni Occupiers at 20:48 12 comments:

The protesters in the Cambridge Law Faulty have been accused of disrupting academic life (they're limiting themselves to the smallest lecture room during student hours) and breaching health and safety by bringing food into the faculty!!

They tried that one at Manchester, and the workers brought them tea and biscuits behind the bureaucrats backs! Check out the blog for developments: http://cambridgegazasolidarity.blogspot.com/
Posted by Leeds Uni Occupiers at 15:30 22 comments:

National Message Board for Occupations

I have set up a message board for everyone involved in or interested in the occupations. Should be easier to use than the email lists.
Check it out at:
http://occupations.proboards.com/
Posted by Leeds Uni Occupiers at 22:29 5 comments:

Hello and Solidarity Greetings from York!

York Palestine Solidarity Campaign are hastily organising a protest at the regional offices of the BBC in Leeds, the ones by the Bus station, and we'd love to see some of you there. Send a speaker, bring fliers and if you've still occupying, invite people back afterwards. See you Wednesday...


Rally outside the BBC in Leeds
The BBC must show the Gaza Emergency Appeal!

The BBC is refusing to show an appeal for Gaza because it claims this would infringe upon its neutral position. This is unprecedented and this is in no way a “neutral” move. Please join us at the BBC's regional offices in Leeds to make this message clear: the decision is unacceptable, and the appeal must be shown!

The protest is timed to coincide with final preparations for, and the live filming of, Look North. BBC staff who support our cause are more than welcome to join us in our protest.

Supported by York Palestine Solidarity Campaign and Officers of University of Bradford Union.
Posted by Leeds Uni Occupiers at 22:19 1 comment:

An open letter to pro-Palestine activists in Leeds

As you will be aware a number of pro-Palestine activists are currently occupying the Botany House building at Leeds University. Our occupation is in support of the people of Gaza who have recently undergone a brutal massacre at the hands of the Israeli Defence Forces which has cost over a thousand Palestinian lives. They are still suffering Israeli aggression and a lacking of food, water and energy supplies as the result of a siege which seeks to break their will and hope.

Students up and down the country have held occupations in solidarity with Gaza, condemning the atrocities by the Israeli state. At the time of writing, 16 occupations at different universities have taken place.

This is an unprecedented national movement in Britain. Occupying students at Oxford reached contact with people in Gaza as they expressed their support. They spoke of the demands that they had won from their occupation including a condemnation from Oxford University of the bombing of the Islamic University in Gaza and the violence that has taken place in the Gaza strip.

The international movement against the genocide in Gaza has won more than just individual demands. It has challenged the legitimacy of Zionism and the right of one people to displace and oppress another with overwhelming force.

But some of the occupations across the UK have been weakened due to the unwillingness of some activists to involve themselves in the occupation movement.

The Zionists are feeling under threat as the legitimacy of Israeli expansionism is being challenged with millions across the world showing their solidarity with Palestine. They are putting pressure on the government, the media, academic institutions and our own student bodies to defeat this movement through scaremongering, threats and false accusations of anti-Semitism.

The Palestinians have gone through a long and bloody battle to struggle for their emancipation. It is only right that now at this moment in which the Palestinians are in their greatest need that we support them to the utmost of our ability.

For this reason we request all the friends of Palestine support and join with the occupation at Leeds University. If we are united we are strong, but if we are divided we are weaker.

We ask all those who wish an end to the Palestinian injustices to join us immediately. We believe this is a historic moment in the international struggle for justice,

The occupying students at Leeds University
Posted by Leeds Uni Occupiers at 22:04 6 comments:

Some of the messages of solidarity from trade unionists, staff, students and alumni

"I am very glad to hear that University of Leeds Students are taking action to End the siege of Gaza. Free, Free Palestine!"
"Dear comrades,

I’m writing to express my solidarity to you all and convey my respect for your courage to stand and be counted.

Please keep up the great work and keep strong, we are all behind you 100 percent. With you in spirit.

"Your initiative is important.  It demonstrates student concern and the feelings felt by many that the slaughter of Palestinians in Gaza by the IDF will not go unchallenged.  It also indicates that the 'international community' means more than only formal positions of states and their leaders but the feelings of citizens that do not accept the routine abuse of human rights and the refusal of Israel to abide by international law."

"I am wholly in support  of this action and would like to help if I can. I am a Leeds Uni student. Please let me know if there is anything I can do. Good on you guys!! It's great what you are doing!"

Well done and good luck with your occupation (with all your occupations!) in protest at the appalling slaughter in Gaza.  In the face of the continuing brutality of imperialism and war, acts of protest like these are vital to uphold simple human solidarity.  Good for you and keep it up 'til you win!

"Keep up the good work, comrades. I'm a former Leeds student, and would've been proud to be standing besides you were I not in London.

Bear in mind you are at the forefront of a movement that will rewrite history. Shame, shame on the Zionist collaborators.
Socialist regards,"
Posted by Leeds Uni Occupiers at 21:56 5 comments: 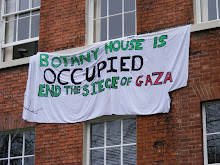 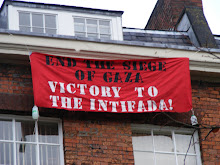 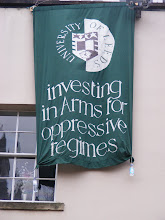